The Road for Truth: the First National Holodomor Museum Special Event was held

The first National Holodomor Museum Special Event was held in Kyiv, November 19. More than 150 executives of Ukrainian and international companies responded to the invitation of the Supervisory Board of the International Foundation for the Development of the Holodomor Victims’ Memorial. Supervisory Board presented the Project of the world’s first Holodomor Museum and announced the launch of the fundraising campaign.


The program of the event began with the visit to the Memorial and the Construction Site of the future museum. Let’s listen to the words of Sergiy Karagan, a 43-year-old builder: “I have been working here from the beginning. I like it.. But more importantly – I am proud of my work. My grandmother used to tell me how soup was cooked and “bread” was baked out of goosefoot during Holodomor… I came here with my children several times. They are proud that I work here.”

“Everyone who knows me, knows that there is a portrait of my grandmother in my office. She is my guardian angel – Lenna Gayvoronska – Koszarny. She survived the Holodomor in Kadiivka/Stakhanov. Today it is an occupied territory. I invoke you. I know that some may invest more, some may invest less. I think we are not just Ukrainians, the nation living in Ukraine, but we will unite around the world to support this project. The world’s first Holodomor Museum needs to be finished!”, – said Lenna Koszarny, Deputy President of the Ukrainian World Congress, Chair of the Board of Directors of the American Chamber of Commerce (ACC) in Ukraine. Also the speech of the project ambassador, daughter and granddaughter of Holodomor survivors Oksana Zabuzhko was extremely expressive : “I am here in this project thanks to my mother, who was a native of the former cossacks’ town, where streets were called “hundreds” (“sotni”). Where in the 1930s a publishing house Prosvita, an amateur theater, the Ukrainian Autocephalous Orthodox Church where located, where there was such a life that I later learned in small towns and villages in France, Belgium, Holland. I know from my mother, it was our lost Europe. I know from my mother, Holodomor is the Ukrainians, who became victim to a terrorist state. And the same terrorist state, which for three generations has forbidden Ukrainians to remember their Europe, which forbids us today to return to the second path from which it threw us in 1933, is actually the main opponent for this museum. Museum, which is a form of national self-knowledge. And this museum should help Ukraine and Ukrainians return to their Europe.” The main feature of the event was the presentation of the future museum by the international creative team consisting of: Andriy Myrgorodskyi, Director of Project Systems LTD (Kyiv, Ukraine), Miroslaw Nizio, Museum Designer and Founder of Nizio Design International (Warsaw, Poland), Gary Walker – Kerr, Partner and Director of Haley Sharpe Design (UK-Canada) and Lesia Hasydzhak, deputy director of the National Museum of the Holodomor – Genocide.

The forthcoming Holodomor Museum is the first large-scale cultural project in Ukraine in which the leaders of world museum design are involved. Nizio Design International portfolio includes the most famous Polish museums, the popularity of which has not waned among tourists for years. Haley Sharpe Design has over 30 years of experience in museum designing. Their works include many museums in Canada, UK, USA, and the UAE. Today, the company specialists are working on the creation of the Grand Egyptian Museum and the futuristic botanical garden in Oman.

Ruslan Stefanchuk, First Deputy Chairman of The Verkhovna Rada of Ukraine, said: “The importance of this project for the state is evidenced by a separate article of the State Budget of Ukraine for the 2020th year, which provides for construction funds. Building the museum is not just a test for the Ukrainian nation. It is a point of memory that we have no right to forget. ”

Volodymyr Groysman emphasized the importance of the completion of the museum.

The Minister of Culture, Youth and Sports Volodymyr Borodiansky emphasized: “The museum is about the Ukrainians who are acting, who endured. We saw terrible pictures today. These people defended their values with their own lives. Someone believes we are not subjective, but we are fighting for our subjectivity. Much appreciation to the people who have taken up this project, who believe in it and will continue.” Also, the guests of the Special Event were presented with a Donor Package, which provides the opportunity to make a contribution to the realization of the Project and become a “co-creator”, “partner” or “friend” of the future Museum.

The project is implemented on the principle of joint and several liability of the state and philanthropists. The museum, which will emerge on the slopes of the Dnieper river in few years, will tell not only the history of the crime of genocide of the Ukrainian nation, but also about the strength of Ukrainians, unbreakability, dignity and many years of struggle for life in the successful  sovereign Ukrainian state.

Only by uniting the efforts of the state and society, socially responsible business and every Ukrainian we will create and open in 2023 to the 90th commemoration of Holodomor the world’s first dedicated Holodomor Museum.

Pedestrian bridge construction has begun
In February 2020, the first and one of the most difficult stages of the museum’s construction was completed – the…
Read More Congratulations to Filya Zhebrovska on birthday
All members of the International foundation for the Development of Holodomor victims’ Memorial sincerely congratulate Filya Zhebrovska, Member of the…
Read More 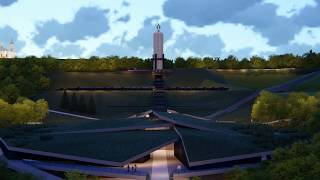 The future Museum
The museum is designed with a multi-level, built-in existing slope with terraced floors, with two entrance groups (from the side…
Read More Congratulations to Mykola Onyschenko on his 94th birthday
All members of the International foundation for the Development of Holodomor victims’ Memorial sincerely congratulate Mykola Onyschenko, the member of…
Read More